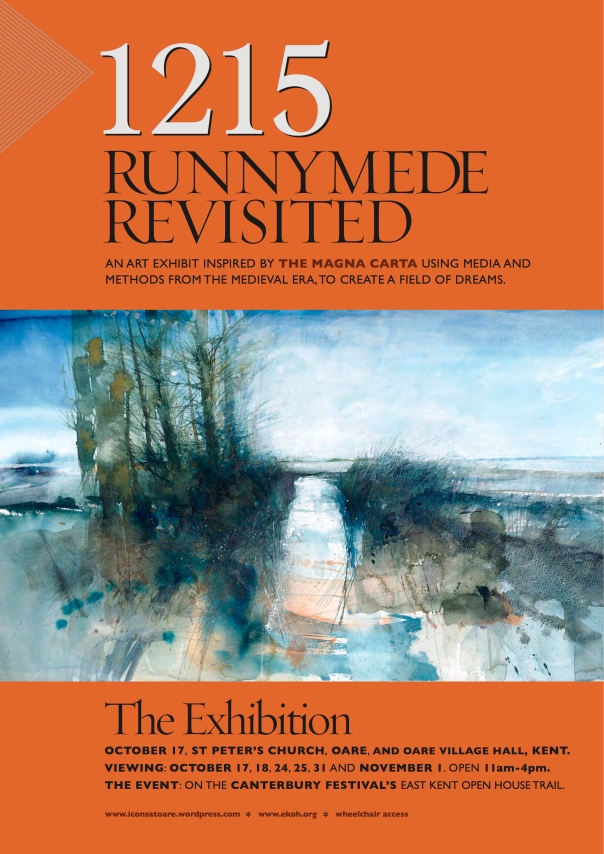 During the Canterbury Festival this October, St Peter’s Anglican Church in Oare, near Faversham, about 10 miles from Ashford, will open its door for an art exhibit in celebration of the  Magna Carta, entitled ‘1215: Runnymede Revisited’, an exhibit enhanced by affiliated events.

The art on display will be restricted to methods and media in use during the medieval era and will include items of notable beauty. This will be St Peter’s third such show, the first two having been extremely successful. This earlier success created a certain trepidation regarding a third, not only because the first two-part Divine Dimensions projects were a unique idea, but they were funded in large measure by a Heritage Lottery Fund grant. An iconostasis was installed where the original 15th century Rood Screen had been, to display a collection of international contemporary icons. Every effort was made to recreate the ambiance of an Orthodox Church. Over three Sunday’s, Orthodox Vespers, Gregorian Chant, Anglican Evensong filled the church beyond capacity and in all 2400 people visited our village to see the event. Extraordinary  indeed when on some Sundays there could be as few as ten congregants. It was therefore decided not to try to repeat such an event, being without funds or time or people power. Rather than be deterred by invidious comparisons, we decided not to lose the opportunity offered by the success of our former efforts, and to attempt a less costly display of similar artistic skill and comparable beauty, but with a balance of sacred and the secular.
To this end, the event was added to the Artist East Kent Open House Trail, (www.ekoh.org) and a second display, ‘1215: Matisse in Oare’ with colourful cut outs connected in theme to the Magna Carta by local school children, will also be on show nearby at the village hall, where refreshments would be available.  A secular charity connected to Justice was also chosen. This idea attracted donors, hopefully drawn by the ideal of Justice and its seeds sown at Runnymede. A plant stall for several weekends also helped to bolster funds, and three members of St Peter’s steering group were joined by a volunteer installation builder and volunteer graphic designer. A balance of Kent artists and others from around the globe was sought, although all have exceptional reputations and the artistry to provide the beauty which was the very feature that attracted people to the icon installation.

‘Beauty will change the world’, so believed Dostoevsky. Pope Francis laments that our beautiful world is becoming a pile of filth, and this has a connection to Justice as it is the poor and downtrodden who are condemned to live in it.  Although the lure of Beauty has been suspect for leading us away from faith it has also played a part throughout history in conversion. No one writes more clearly and passionately about our disconnection to the beauty of the world and to God than the poet and translator Philip Sherrard in his’The Rape of Man  and Nature’ .  An evening of Modern  Greek Poetry and music  was dedicated to Sherrard  during Divine Dimensions. He was like many others,converted to Christianity by beauty, in his case the  natural and built environment of Mount Athos. He later was one of the translators to English of the Philokalia  a treasury of works by the early church Fathers.

Thomas Merton  likewise, was converted by seeing an icon in Rome  and it is said that the conversion of Russia to Orthodoxy  was due to the beauty of the services and the magnificence of Agia Sophia where they took place when witnessed by the Prince of Kiev’s  emissaries . There has always been a link between art and religion since the earliest caves paintings, it is a way of expressing the awe of creation which we ignore at our peril.

Maybe the poetry reading  this year,  by the fine Medway poet Bill Lewis, should be dedicated to Simone Weil, the ‘ outsider saint’ buried tens miles away from Oare in Ashford. The enigmatic, agnostic philosopher,  of Jewish descent, a reader of many languages including Sanskrit and Ancient Greek, best suggests the tie between faith , beauty and justice. She had her first mystical experience of Christ after three ascetic experiences: the heart rending sound of ancient hymns,  sung by candle bearing Portuguese women in the moonlight ; three days at Santa Maria degli Angeli where St Francis had prayed led her for the first time to fall to her knees, and during Passion Week at Solesmes where the beauty of the Liturgy enabled her to transcend her excruciating headaches that had nearly driven her to suicide at fourteen.  The introduction to the poetry of George Herbert had an effect like prayer upon her. At the same time Weil’s love of the beauty of the world , past and present and the artistry of other faiths and her intense intellectual honesty prevented her being baptised. She told Father Perrin ” Christianity is catholic by right  but  not in fact,so many things God loves, things outside it or they would not be in existence.” She claimed that in the Gospels Love and Justice were the same thing. From earliest childhood the Christian idea of the  love of ones neighbour ‘ she called ‘ justice’. At the age of five she refused to eat sugar when learning that the soldiers in the trenches could not have it, her early death at the age of 34  during the war whilst working for General de Gaulle, is often attributed to her refusing the nutrition she needed,  in solidarity with the soldiers.  Surely she would have joined in our celebration of the Magna Carta but might well mourn the fact that our world is still lacking in love. Runnymede  was a field of dreams, and it is hoped that that field continues to flower.

West End Studios artist Ann Welch will be showing her work at Creek Creative in Faversham in a show called Samovar Sojourns: Travels of a Tea Drinker, from April 15 to April 27 2014.